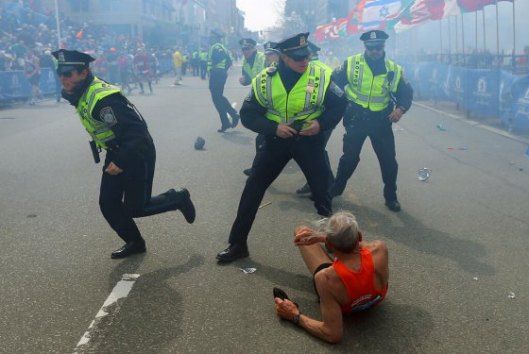 Tragedy and disaster are not a rarity in the world as we know it.  Seems like every day, if you flip on the news, open up Twitter or Facebook, or read the paper, something has happened somewhere.  We experienced that once again yesterday, with the bombing at the Boston Marathon finish line.

The one lasting impression in the aftermath of any tragedy is how the general public responds to it.  Even more so than the gruesome pictures and film, or horror stories that come out of the situation, how everyone responds is what everyone will remember in the end.

Think about following that, though.  After a week with nothing happening, sports took the field again, in the form of football and baseball.  All of the glowing tributes, the different renditions of the National Anthem, “God Bless America” during the 7th inning stretch; sports helped take people’s minds off of reality just long enough to get back to a somewhat normal life.

Now, a day after the bombing in Boston, the same thing will be happening.  Yes, there were tributes last night during baseball, hockey and basketball games.  Tonight, it hits a lot closer for Boston sports fans.  During the baseball game between the Arizona Diamondbacks and the New York Yankees, yes those Yankees, a special tribute will happen at Yankee Stadium following the 3rd inning.  A moment of silence will be held to honor the victims of this devastating tragedy, followed by a Boston favorite, Sweet Caroline.

That alone will make even the most diehard sports fanatic pause for a minute and think about what happened.  Well, unless you’re Jay Mariotti; that’s for another time.

It doesn’t stop there.  The University of Louisville, tonight, will be wearing a patriotic version of their baseball uniform during their game.  You can bet there will be other moving tribute in stadiums and arenas around the nation.

Just this morning in the Chicago Tribune, the front page of the Sports section has a full-page layout listing the different Boston area professional sports franchises, preceded by “Chicago is…”. 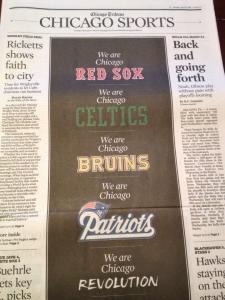 No one ever wants to hear about devastation like what happened yesterday in Boston.  Doesn’t matter where in the world it happens.  There is one common denominator, though, and that is if you are a sports fan, you can agree it makes things a little easier to get by.  Remember 2001; translate that into today.