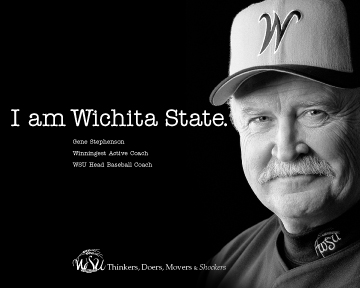 Imagine if Duke fired Mike Krzyzewski after a couple of “subpar” seasons.  Or if Syracuse canned Jim Boeheim for a string of seasons that only resulted in a conference title.

In the world of NCAA Baseball yesterday, the equivalent happened.  Wichita State Head Coach Gene Stephenson was fired after 35 years at the school.

Some of you may say, “So what, coaches get fired all the time.”  Maybe so, but do coaches with nearly 1800 wins, 20 Conference Championships, 18 Conference Tournament Titles, 28 NCAA Tournament appearances, 7 College World Series appearances and a National Title get fired?

I saw the argument made yesterday after the firing that Stephenson hadn’t taken the program to the College World Series since 1996.  They were trying to use that argument as the basis for the firing.

All of the arguments are ludicrous.  Stephenson has the second most wins in college baseball history.  His 1982 team still holds the record for the most wins in a season with 72.  No Wichita State team in his 35 years as head man ever had a losing record.  35 STRAIGHT YEARS OF WINNING!

Prior to Stephenson’s arrival in Wichita, the program’s combined record was 259-283-5.  The program had been disbanded twice in their history for lack of success.  There were 17 head coaches prior to Stephenson, in 36 combined seasons of play.

Tell me where any of that translates into firing your head baseball coach?  Nothing?

Effectively, all Wichita State did was tell other coaches around the nation, no matter what sport, that winning and loyalty to a program mean nothing.  Yes, Stephenson briefly signed on to be Oklahoma’s coach in the mid-2000’s, but immediately decided to return to the only school he knew as a head coach.

Watch out Coach K and Coach Boeheim.  Move over Coach Cal and Coach Garrido.  Maybe you have hung around too long.  Maybe, just maybe, it’s time for a change.